Showing posts from 2016
Show All

At Guitarbitz we're ALWAYS thinking of new things that we think you'll love and we've recently had lots of awesome new gear through the door! Check out our top 5 new products so far this year and have a little read about what they can do! These are in no particular order, we love them all the same! 1) AKG Professional Headphones We LOVE pro headphones. They're fashionable, cool, they make your music sound 10x better and they're excellent value for money. We've recently become a stockist of AKG pro headphones here at Guitarbitz and we have to say, they are incredible. Even the cheapest ones at £33.95 really kick some butt! If you've only ever used your iPhone earphones then you won't believe the clarity and quality that Pro headphones give you, it's quite amazing. If you're into recording, mixing or you're doing any sort of work with music then a good set of 'cans' is an absolute must. So, we recommend a good pair of AKGs! Cli
Post a Comment
Location: Frome, Somerset BA11 2RY, UK
Read more 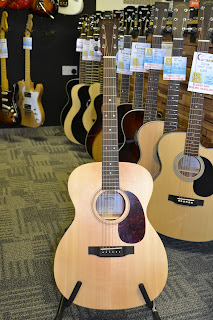 Top 10 Guitars Under £300  1.   Sigma GME  -  http://www.guitarbitz.com/guitars-c48/electro-acoustic-guitars-c82/sigma-gme-electro-acoustic-natural-p2909 When you first sit down to play the Sigma GME, there are a few things you notice: 1. “Wow! I didn’t know I could play this well.” 2. "Oooo, is that a solid top?! Nice! I bet it’s expensive." 3. "How much! No way. Only £195!" This Sigma may not be flashy, but when it comes to a great playing guitar at a great price, flashy is not what you need. Somehow, this solid top electro is able to boast a sub £200 price tag while playing and sounding like something over twice the price. The top is made from solid Sitka Spruce that gives a juicy full range of tone, aided by the mahogany its back and sides. This sound can then replicated seamlessly through the built in Sigma pre-amp, so you can be guaranteed a perfect sound for any gigging or recording. 2. Yamaha Pacifica -
Post a Comment
Read more

We all know that Vintage make some great guitars for the small price tag but just check out this STUNNING V100PGM Lemon Drop , what an amazing looking guitar! Based on Peter Green's Gibson Les Paul, the V100PGM features a stunning flame Maple top, reverse neck pickup and the two style control knob configuration. It looks amazing but it also does the job in terms of sound, feel and playability. With punchy tones clean or driven it simply ticks all the boxes if you wan that classic Les Paul tone! If you didn't know Peter Green played in Fleetwood Mac! Check out the real Peter Green Les Paul: At just over £300 it is incredible value for money! These really are brilliant instruments for the money. And they look pretty darn similar too! You can buy these awesome guitars at Guitarbitz Guitar Shop online and in store. Click the link to view this guitar on our website: http://www.guitarbitz.com/guitars-c48/electric-guitars-c57/vintage-v100-hi-gloss-tobacco-burst-lemon-dr
Post a Comment
Read more

Until 29th February we're giving you the change to get a FREE Kinsman hard foam case when you buy a Squier electric or bass guitar at Guitarbitz. The case, worth £54.95, provides amazing protection for your guitar whilst being light and easy to transport. This deal applies even on our cheapest Squier models such as the Bullet Strat . Costing just £105 you're essentially getting the guitar for half price! An excellent deal not to be missed. All you have to do is place your selected new guitar in the basket and apply the discount code 'FREECASE'. Check out our Squier guitars HERE . * Deal not available with Squier guitar packages.
Post a Comment
Location: Frome, Somerset BA11 2RY, UK
Read more 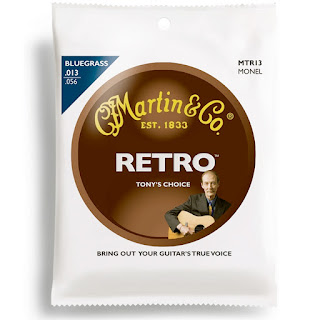 We've recently listed some new strings by Martin that are supposed sound how acoustic guitar strings were back in the day. The Martin Retro range of strings are made from Monel, a Nickel & Copper alloy, they look quite like electric guitar strings and have a vintage appearance. We thought that we would give them a go to see if they did what they said on the packet. Martin say these strings brings out the unique woody tone from your guitar and that they have complex harmonics . Hear your guitar like you've never heard it before! Sounds great but do they actually do what they say? Well, after a quick re-string on a Martin Dreadnought Junior, it has to be said we are pretty impressed! These strings are full, balanced, powerful with a stunning tone unlike what we're used to by using either Phosphor Bronze or 80/20 Bronze. And sure enough the harmonics are pretty awesome. Pluck the low E string and just listen to how the note develops... Complex harmonics? Yes. It'
Post a Comment
Location: Frome, Somerset BA11 2RY, UK
Read more

A while back DigiTech released the ' Trio ', a guitar pedal that creates a backing track based on the chords you play into it, and we thought it was pretty darn awesome! Now though, (drum roll please), DigiTech have released a brand new version that's geared up for extra functionality and it even features a looper (something we wished the other one had!). Before you would play your chord sequence into the Trio and it would generate a drum and bass backing track. Now you can create your backing track AND loop your chord sequence as well so it becomes a fully comprehensive, extremely convincing backing track that's created in seconds! It really is AWESOME! Whether you're simply playing at home and want to jam along to your own backing music or if you're a pro, playing a show to your fans this magical device really will transform the way you play! Personally, we love it for practicing, when you're trying to write that killer guitar solo you need
Post a Comment
Location: Frome, Somerset BA11 2RY, UK
Read more

Well, it seems that we've been waiting for Marshall to pull something out of the bag for a while now. Yes, we've had the Astoria range and other boutique / hand-wired amps but nothing in the 'amp modelling' category. Marshall tested the water a few years back with their JMD series amplifiers which allowed users to model classic Marshall sounds, but it never really took off. As technology progressed and progressed they just didn't seem to want to utilise it... Until now. So, here we have the all new, for NAMM 2016, the Marshall CODE series. And, to be fair, they look pretty darn nice! They are all modelling amplifiers... Yes, it had to happen sometime as other brands such as Fender, Blackstar or Vox are doing well with their popular modelling combos. Could the CODE be a competitor to, say, the Fender Mustang , Blackstar ID:CORE or the Vox VTX ? I think the answer could be yes. Reading up on Marshall's website certainly gives you the impre
Post a Comment
Location: Frome, Somerset BA11 2RY, UK
Read more
More posts